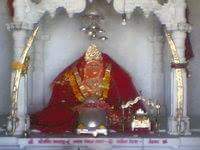 The kuldevi of the Jhala kul The Jhalas presided over two of Mewar's foremost noble estates, Bari Sadri and Delwara, as well as over Jhalawar, an independent kingdom that split off from the Cauhan-ruled kingdom of Kota.

Three little boys, princes of the royal family, were playing outside the palace when a mad elephant suddenly charged. Ad Mata, their spinster auntie, had been watching them from a second-story window. Just in time, she reached out for them with her arms, which grew and grew until they extended all the way down to the children. She snatched up the children and lifted them into her embrace. In this way Ad Mata saved the princes and so the royal lineage.

Another variant adds that because Ad Mata rescued the boys, the line descending from one of the princes came to be known as Jhala , meaning "snatched" or "grabbed."[8] This etymology is well known by Jhalas, who date the origin of their kul to this kuldevi miracle (camatkar ).