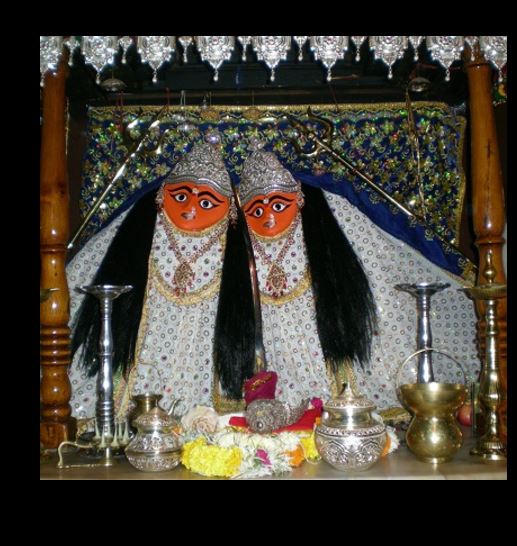 The history of Chamunda Maa is very puranic (old), why people say indian legends and stories are classed as myths is very wrong as substantial proof, history and artefacts have been found.Maa in chotila are swayambhu, which means she has self manifested and has not  been man made. The story is that a holy man had a dream in which he was told by Maa that she was under the earth on Chotilo hill.He was instructed to dig in a certain spot and Maa would appear there, he did what he was told to do and they found the beautiful Chamunda Maa. At that spot the temple was consecrated and to this day the temple is still there.In the last decade the temple has been renovated and the darshan hall has been extended the new steps and corrugated sheets above the steps have been provided by the Ambani brothers.Many people say Chamunda Maa is twinlike or two sisters that is not true, the story is that Kario Bhil was a devotee of Chamunda Maa and was his kuldevi and he had promised Maa that if he begot a child he would make another image of Maa in chotila if his prayer was fulfilled.Maa chamunda is very dayali and listened to his prayer, over time he forgot about his promise and Maa gave him a test, he was caught stealing by the British raj and sentenced to jail.

Why you wonder why a Bhakt of Maa was caught stealing?

Chamunda Maa had given him a shawl that when laid on the ground and sit on it  would transport him into the air, the reason he was given this was to pillage the ships of the british raj that was carrying gold, jewels and coins which they had taken away from indian rajas. He started to carry out Maa's wish and with this treasure he would sell it and feed the poor. One day he was caught due to Maa's lila and taken into jail. Maa appeared to him in a dream and reminded him of his promise.He woke up and apologised to Maa and said he would fulfill the promise, due to difficulty as he was now old Maa completed his promise and she self manifested a secong image of herself in Chotila.Once the arati has been done in the evening no one is allowed to stay in the temple, even the pujaris have to leave the temple.people have actually seen a very big cobra appear to people who do not follow this command.Once a man decided he would sleep outside the temple for the night, not realising the command when he woke up the next morning he was at the bottom of the hill.Maa's lions also stays on the hill that is the reason why there is a large statue of a lion outside the temple as it is also Maa's vahan (vehicle).

In ancient times each shaktipith in gujarat has a lake or talav where you bathe before you visit the temple, the name of the lake for Chamunda Maa is called Bhadarv Nadi.

No one hardly goes there now as ancient customs are slowly being forgotten.

At the entrance to Chotilo Hill there is a Mandir where you can have darshan of Maa (a replica of Maa is here), where you can go if you are not able to climb the steps.

If you are able to go to the Mandir at the top of the hill , then you also have to visit the temple at the bottom, otherwise your darshan is not complete. This mandir is at the entrance where you start to see all the shops on either side before you reach the Hill. A third mandir has been built at the bottom of the hill which also has a replica of Maa.

The aarti of Maa is very different no words are spoken the aarti is done with the beating of drums.

The aarti starts of with dhoop being offered to Maa and then aarti is done with lamps (divas).

The story is when Demons Chand and Mund came to conquer Devi Mahakali and in the fight that ensues, the Devi cut their heads and presented these to Maa Ambika, who in turn told Mahakali that will be worshipped as Chamunda Devi. Again Mataji temples are always located at the top of the hills in India and the reason for this is that if you want darshnas of Mataji, you will have to undergo some physical strain.

Chamunda Mataji is the Kuldevi (family goddess) of most of the Hindus staying in Saurashtra region of Gujarat State in India.

In Chotila Mountain, there about 700 stoned steps up to the top of the hill. These steps were not covered by the shade before about 5 years. However, a good shade and railings now cover the entire walkway thus providing comfort to all the pilgrims. Famous industrialists, Ambani brothers of Reliance industries have donated this covering and the shades on the hill.

During the navaratri festival, a big havan used to take place on top of the Chotila hill. It is said that after the aarti at chotila hill in the evening everybody comes down the hill and that no one stays there that's what Chamunda Mataji has said. Also people have encountered that there is a lion on the hill or dungar of chotila.