The Ganges entering the Plains near Haridwar year 1836

The Ganges entering the Plains near Haridwar year 1836 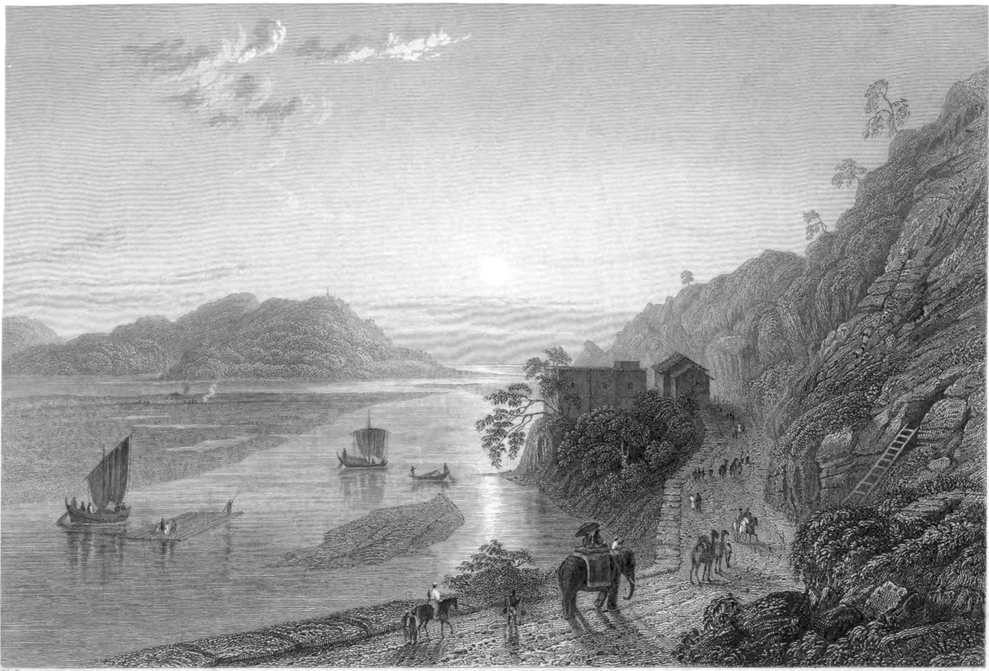 THE GANGES ENTERING THE PLAINS NEAR HURDWAR from Views in India, chiefly among the Himalaya Mountains by  George Francis White 1836

After journeying for some days through an inland country, the sight of a river always affords gratification, and at all times and seasons European travellers, possessing the slightest degree of sensibility, share in the enthusiasm with which the natives hail a view of the Ganges. At the spot in which we now beheld it, the sacred river was peculiarly interesting: it had already traversed in its winding course over a hundred and fifty miles, from its secluded mountain birth-place, amid mighty labyrinths of rocks; and, now, having forced a passage through the last barrier, fairly emerged in a broad clear stream upon the plains. No longer opposed by difficulties, the rage and fury of its rush has subsided, tranquillity characterizing the torrent which came foaming and dashing from its source, now leaping a precipice, and now wearing away the solid rock in the impetuosity of its progress.

Beyond the point in which the Ganges enters the plains, to its final junction with the ocean, a distance of twelve hundred miles, it flows smoothly and placidly along, occasionally vexed and ruffled by the tempest, or, assuming an alarming degree of velocity, as swelled by the melting of the snows, its strong current flies with the speed of an arrow. There are, however, no cataracts in its long descent towards the sea, the fall being somewhat less than a foot a mile, through a channel which varies in width very considerably in particular places and at particular seasons, until, as the mighty river approaches the ocean, it spreads out its waters afar, pouring them forth in a flood ten miles broad. The Ganges is not fordable below its conflux with the Jumna; but though it may be crossed by men and animals at several places previous to its junction with this majestic tributary, the navigation is never interrupted from the spot in which it runs into the plains. Its rise is seldom above thirty-two feet, and when it reaches this height, it spreads over the adjacent country like a sea, inundating the low land, and frequently destroying whole villages, those that remain rising like islands in the midst of the flood.

The road by which we travelled was skirted on one side by a precipitous craggy range, clothed with lichens and creepers of various descriptions, and crowned occasionally with a tree spreading its delicate foliage against the sky, a ladder of bamboo here and there aiding the ascent. Beautiful wild flowers, some of them highly odorous, were springing from the clefts, while the bright river which glided beside us blushed with the pink of the lotus blossoming on the surface.

The Ganges, at this place, abounds with fish of all kinds; and, amongst them, the king of the finny tribes, the noble mahaseer, or great-head, which by many persons is esteemed the most delicious fresh-water fish which ever gratified the palate of an epicure. It rises to the fly, affording excellent sport to the angler, sometimes attaining the size of a large cod, and is taken with considerable difficulty, even by those who have been accustomed to salmon-fishing in the most celebrated rivers of Scotland. The mahaseer is sent to table in various ways, Indian cooks being famous for their fish-stews and curries; but it does not require any adventitious aid from the culinary art, as it is exquisite when plain-boiled, being, according to the best gastronomic authority, luscious but yet unsatiating. In India, fish can only be eaten in perfection on the banks of the stream where it is caught; it must be cooked immediately upon its capture, for it will not bear salt, and after boiling can only be kept for a few hours in a pickle composed of vinegar, chilies, and green ginger. With respect to this latter adjunct, those who possess any philanthropic feeling will unite in the hope that at some not very distant period the root which produces it may be made to flourish in European gardens, for there can be nothing that enters more generally into the composition of every dish, whether savoury or sweet. The warm aromatic flavour differs widely from the harsh biting heat of the dried root, while the stewed slices possess a degree of richness and delicacy which are highly agreeable to the taste. This digression in favour of the mahaseer, and green ginger, though characteristic of Indian travellers, may be considered by some readers out of place at an approach to one of the most sacred spots throughout Hindostan.

We were journeying to the gate of Huna, or Vishnu, the most popular of the Hindu triad: the town of Hurdwar, or Hurrudwar, a scene chosen from time immemorial for the concourse of pilgrims from every part of the Eastern world. To behold the Ganges at the moment in which, having forced a passage through the mountains, it glides in one broad stream along the plain, seems to the exhausted devotee, who has suffered every fatigue and privation consequent upon a long and painful journey, aided by very scanty means, as more than a recompense for all his toils. He gazes, enraptured, on the holy river, and, gathering up his failing strength to the task, presses onward, but too happy to yield up life with the first plunge of his body in the hallowed wave. A blessed immortality is, according to universal belief amongst the followers of Brahma, secured to the person who thus has ended his career on earth; and many, wearied of life, and anxious to enter scenes of purer enjoyment, will either commit suicide, or, if too feeble to perform the act themselves, prevail upon their friends to hasten the moment of dissolution, leaving their bodies to float down the Ganges, while their souls are absorbed in the divine essence.

It is at this place that persons journeying from a great distance are anxious to fill their jars with water, in order that they may carry a portion of the sacred element to their homes. Sometimes these water-pots are conveyed in a very picturesque manner, being slung upon bamboos resting upon the shoulders of long files of men, and gaily decorated with flowers and peacocks' feathers. Rich and pious Hindoos, who inhabit the Deccan and other remote provinces, spend large sums of money in procuring the holy-water of the Ganges, which is brought to them by a class of persons who obtain their livelihood by their long journeys. They are, however, content to take the water at the nearest point, and, if not basely maligned, are said to have little scruple about supplying any deficiencies, occasioned by breakage and leakage on the road, at the first river or well which they pass on their way. Some precautions are taken to prevent these frauds: in order to prove that the water has in reality been brought from the Ganges, the bearers obtain a certificate to that effect, together with a seal, with which the proper official at the place where it is filled, closes the vessel. The jars are enclosed in a frame-work of bamboo slung at either end of a pole of the same, which is carried across the shoulder, and is borne in this manner many hundred miles. The bearers of the Ganges water, though having literally nothing to tempt the plunderer, have been frequently murdered of late years by those frightful bands of assassins, the Thugs, who consider it to be an act of duty towards their goddess Bhowanee, who represents the destructive power, to sacrifice all the victims which she throws in their way, and therefore murder the most poverty-stricken wretches, in the hope of being rewarded by a richer booty.

An acquaintance with a tithe of the horrors, the shocking waste of human life, the fearful sum of human suffering, produced by the most barbarous as well the most inconsistent religion which the distempered imagination of man has ever framed, suffice to call forth melancholy feelings in the breast of the Christian spectator, as he gazes upon the bright waters, subjected to so many and such dreadful pollutions. Recognizing the Supreme Power in the blessings which a benignant Deity lavishes upon the objects of its creation, an untutored mind may be forgiven, if, ignorant of the Source whence the benefit is derived, adoration and homage should be paid to the tree affording shade, or to the river, which supplies the element so necessary for the preservation and enjoyment of life. But the Hindoos have, with the blindest perversity, departed from the early simplicity of their creed, and have reared, throughout scenes of tranquil beauty, altars cemented with human blood, desecrating the pure waters of the Ganges with the swollen corses of the dead, who have been murdered on its banks, in obedience to the most horrid superstition. It is deemed incumbent upon the relatives of a dying person to hurry the unfortunate to the side of some sacred river, there to breathe the last sigh; and when death is protracted, and exposure to cold dews or a burning sun fail to accomplish the object desired, the sufferer is relieved from his miseries by a more summary mode, the mouth and nostrils being stopped with the mud of the Ganges, which is supposed to possess purifying qualities. There can be no doubt that the death of multitudes is hastened by this process: for when once a patient is brought down to the water to die, recovery is deemed disgraceful, inasmuch as it proves that the person thus escaping is rejected by the gods.

In consequence of the expense of burning a corse upon a funeral pile, wood being in India both scarce and dear, individuals belonging to the poorer classes are after death thrust into the river with very little ceremony, affording a shocking spectacle to unaccustomed eyes, as they float down generally with the ghastly head above the water. People who can afford it, obtain wood for the performance of the last sad rites; but, generally speaking, they grudge the cost of a quantity sufficient for the purpose of reducing the body to ashes; it is merely scorched a little, and then consigned to the Ganges. When incremation is completed, the traveller who is so unfortunate as to pitch his tent or moor his boat near the scene of action, suffers very considerable annoyance from the effluvia arising from the burning corpse, while at the same time his eyes may be shocked by the sight of some huge carrion-bird, wafted down the river by the prey which it has seized and is devouring, a corpse being frequently indicated by the vulture which has perched upon it.

These are some of the sights which deform a river, whose calm and heavenly beauty few can behold unmoved by admiration. Cold indeed must be the person who could refuse to acknowledge the loveliness of the scene presented in the accompanying Plate; and every step of the road there delineated, constructed by Government into the valley of the Dhoon, leads to some region equally gratifying to the eye of taste.