On the occasion of 550th Anniversary celebration of Guru Nanak Devji, here are Gurudwaras/Places closely associated with his life.

The founder of the Sikh religion Guru Nanak Dev Ji was born in Nankana Sahib. The township was founded by Rai Bhoi, a rich landlord Rajput Muslim and thus was known as Rai-Bhoi-Di-Talwandi. His great-grandson Rai Bular Bhatti renamed it as 'Nankana Sahib' after the birth of Guru Nanak. 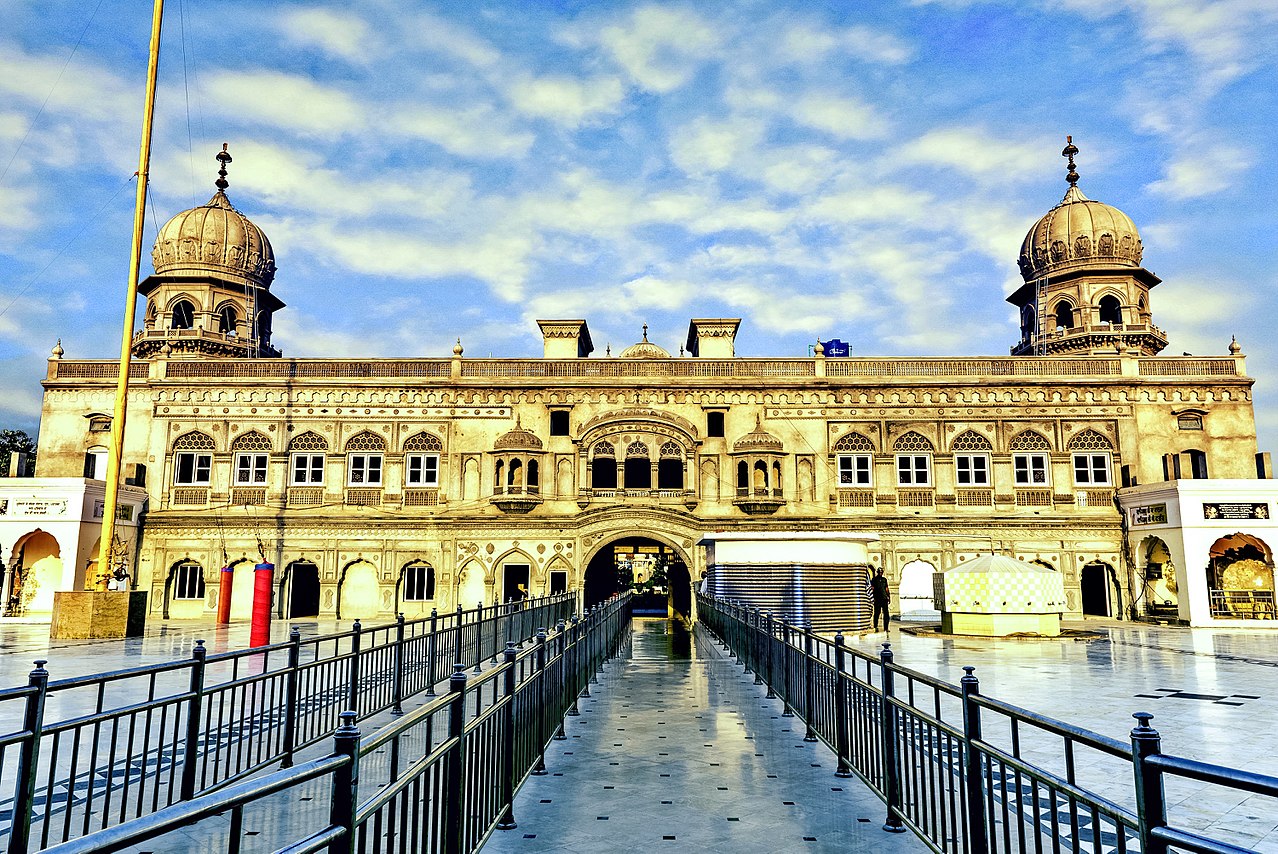 Guru Nanak as a young man was sent by his father Mehta Kalu, who was hoping to instil a sense of business in his son, to buy some goods which he could return home with, then sell and make a profit. At least that was Mehta Kalu’s plan but along the way to his destination, the young Nanak came across some sadhus who were hungry and without food. The Guru decided to use the sum his father had given him (a sum of Rs. 20)  to provide a meal, langar for the Sadhus. Returning home without any purchases Mehta Kalu was very annoyed. But young Nanak explained to his father that he had done a very good deed, feeding the starving Sadhus, and gaining the best profit one could gain from the money. In memory of Nanak's gracious acts, Gurdwara Sacha Sauda stands there reminding us, God wants us to share our earnings with the needy. 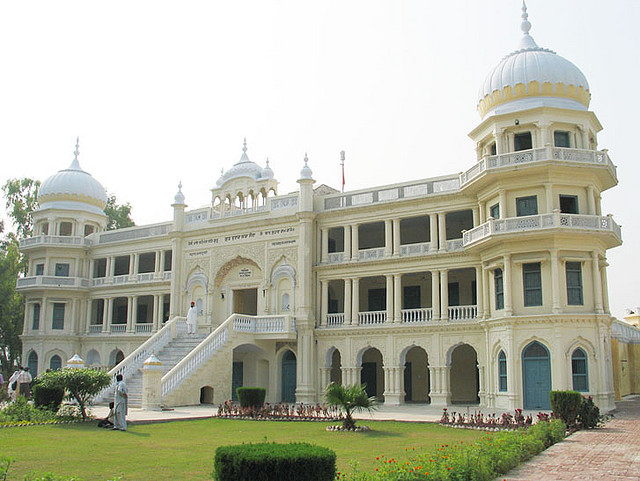 Gurdwara Rori Sahib is the sacred shrine which marks the site where, according to tradition, Guru Nanak after the destruction of the town had stayed with Bhai Lalo. Here the Guru had to sit and lie on a hard bed of pebbles (small stones) (ror-ree in Punjabi) as alluded to in Bhai Gurdas Varan. When the armies of Babar entered Punjab in 1521, Guru Nanak Dev was present in Eminabad. At the time of capture of Eminabad, many locals were arrested, among whom was Guru Nanak Dev Ji. At the time of the arrest, Guru Nanak Dev Ji was sitting on the pebbles and was busy in his prayers. The Gurdwara stands at the place of the pebbles. 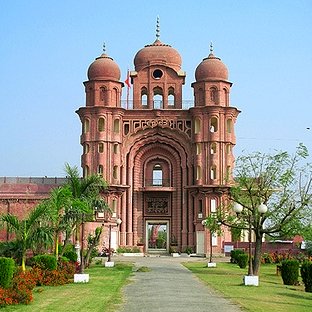 This Gurdwara Sahib was built by a Sikh devotee named Natha Singh in the memory of first Sikh master Guru Nanak Dev Ji. It is said that Guru Nanak Sahib had taken rest beneath the tree of berries at this place in Sialkot while returning from Kashmir. Also, Here Guru Nanak made Peer Hamaz Gauns his follower.

Location: Sultanpur Lodhi, Kapurthala, India. Guru Nanak Dev Ji sister Nanaki Ji and her husband lived here. It was in Sultanpur Lodhi that the Sikhism founder is believed to have attained enlightenment.

Guru Nanak performed his morning ablutions in the Bein and then sat under a Ber (Zizyphus jujuba) tree to meditate. Guru Ji meditated at this tree daily for 14 years, nine months and 13 days. It was during one such ablution that Guru Nanak had what is described, in the Janam Sakhis, as a direct communion with the Divine. As the Janam Sakhis narrate the details, Guru Nanak one morning disappeared into the stream and was not seen for two days. When he reappeared at a spot, 2 km upstream, now known as Sant Ghat, the first words he uttered were, "No one is Hindu, No one is Musalman (Muslim)." Guru Nanak was now ready to embark on his long journeys. Gurudwara Ber Sahib is built by the side of an old ber tree which is believed to be the one under which Guru Nanak would sit in meditation. 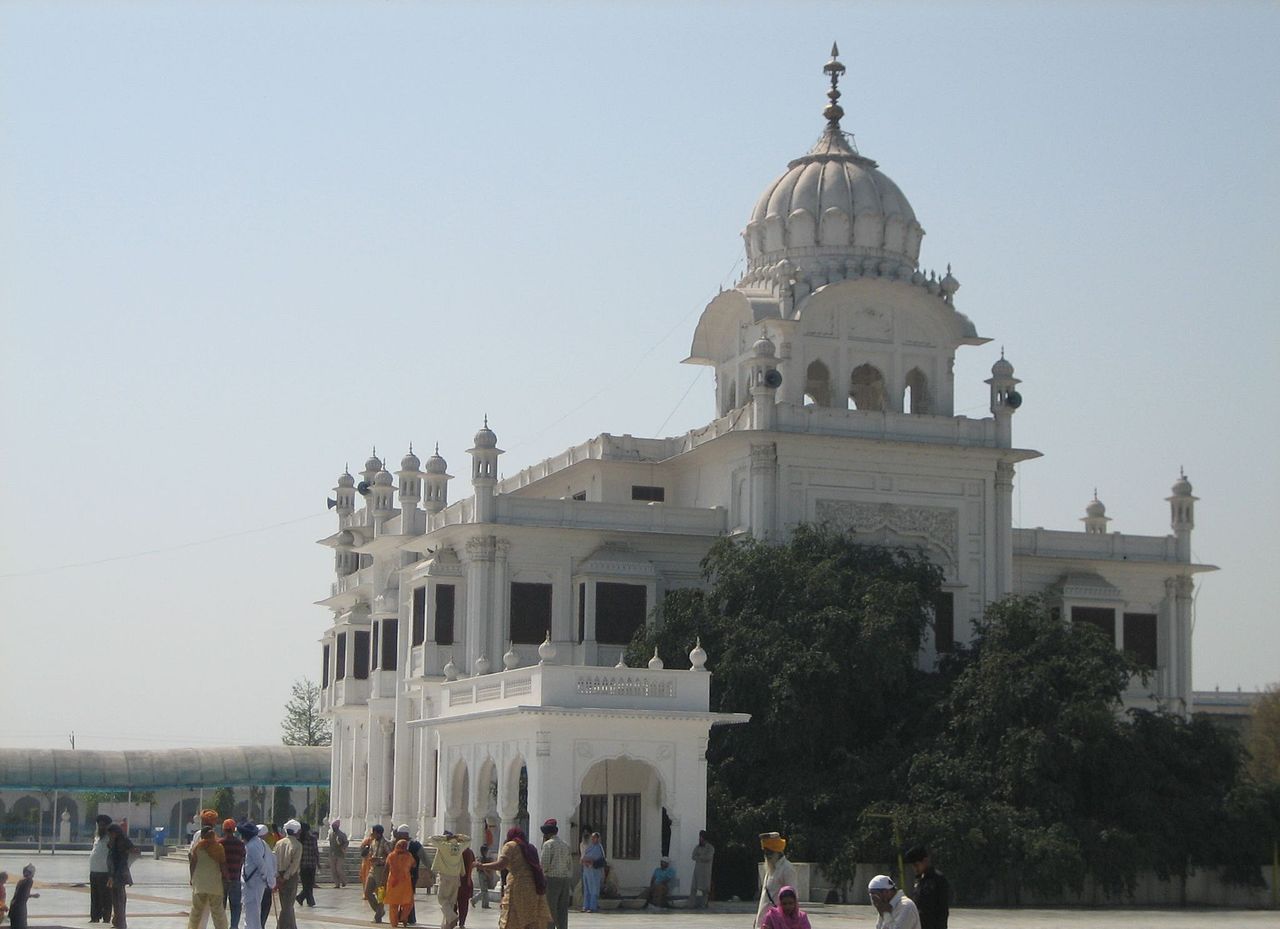 It is situated on the bank of the river "Bein". From the Ber Sahib, Guru Nanak Dev Ji dived into Bein & disappeared for 3 days. On reaching Nirankar's place Sachkhand, he got Satnaam's Updesh " Mool Mantar" from Nirankar which he gave to the whole world. The big reason for this place to be named Sant Ghaat is that Guru Nanak Dev ji meditated here to the God Almighty & went from here to serve the World. 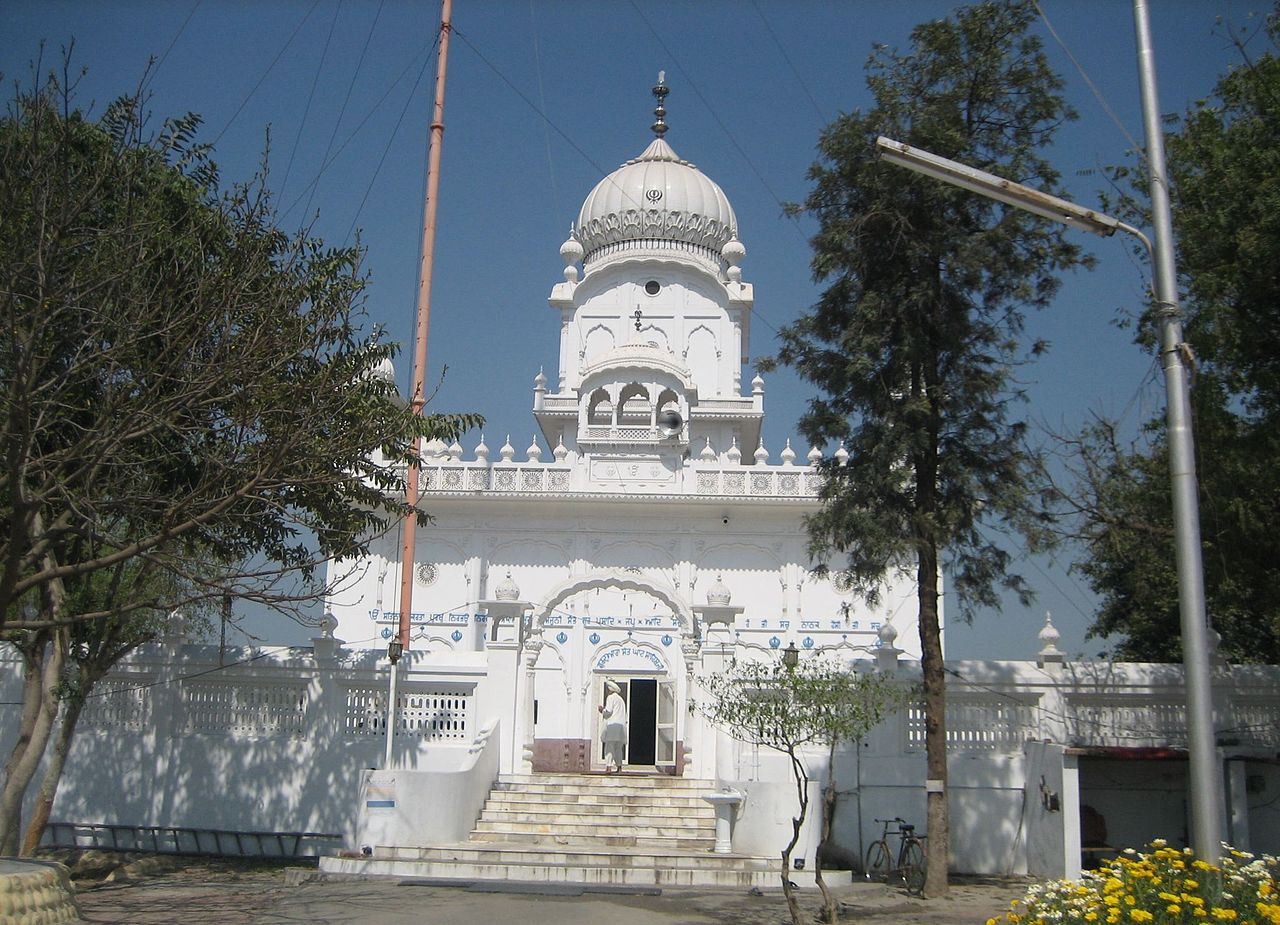 As a young man, Guru Nanak was convinced by his family to accept employment here as the accountant of the provisions of Nawab Daulat Khan Lodhi. Guru Nanak got the job on the recommendations of his brother-in-law Jai Ram. The Nawab was very much impressed by the young Guru who would work diligently in the day and spend the evenings and night singing the praises of God with his friends. 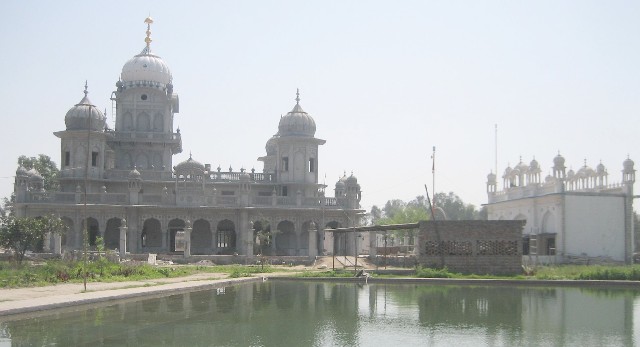 Guru Nanak spent 14 years in Sultanpur Lodhi as a young man working for Nawab Daulat Khan Lodhi. This was the house of Guru Nanak where his two sons Baba Sri Chand and Baba Lakhmi Chand were born. Guru Nanak tested his two sons, but neither proved worthy of being his successor. Baba Lakhmi Chand was too involved in worldly affairs while Baba Sri Chand chose the path of renunciation and became an aesthetic. Guru Sahib used to have Langar prepared by Bibi Nanaki Ji. Well (Khooh) is also located here, from which water was used for Langar Preparation. 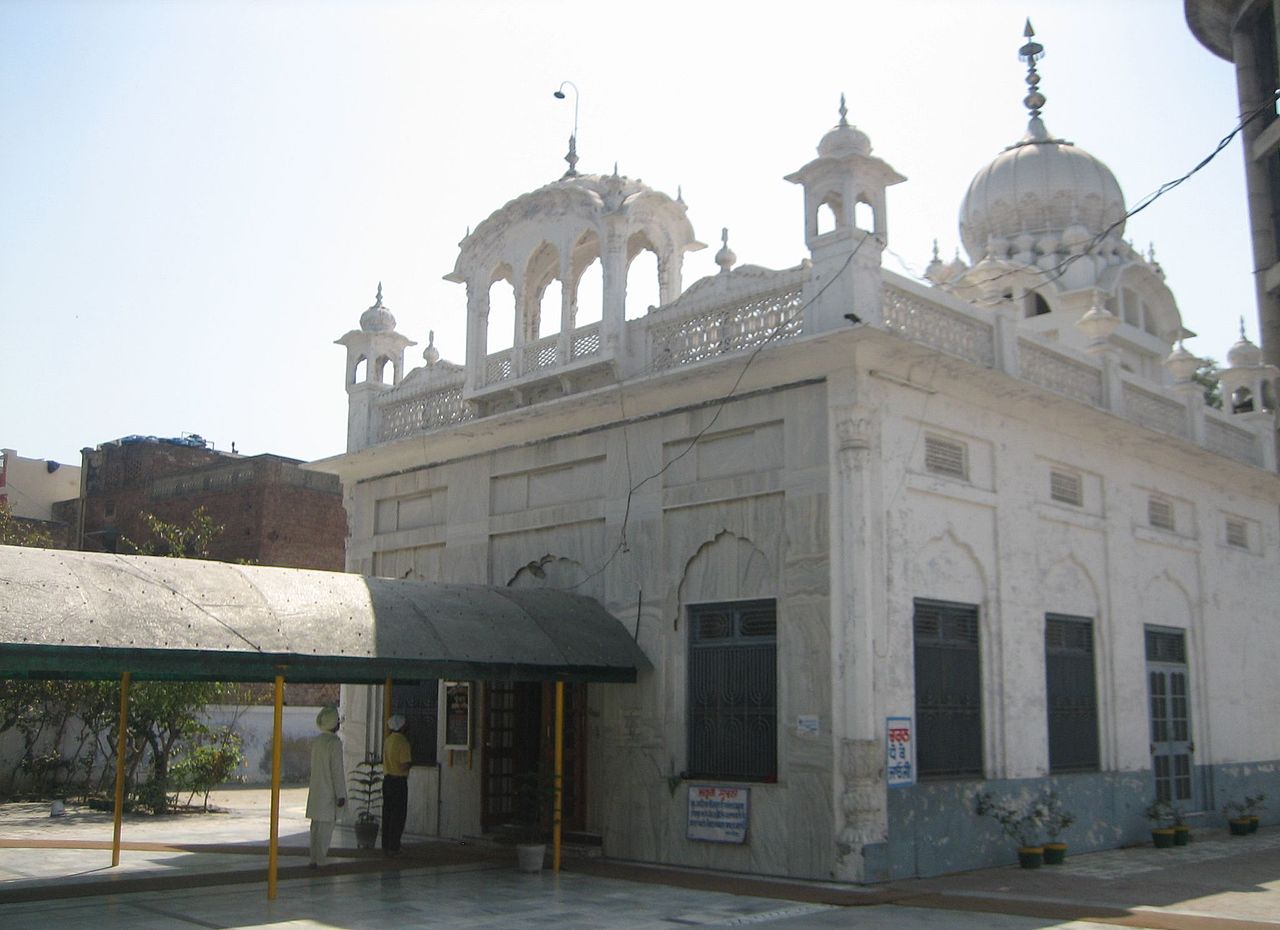 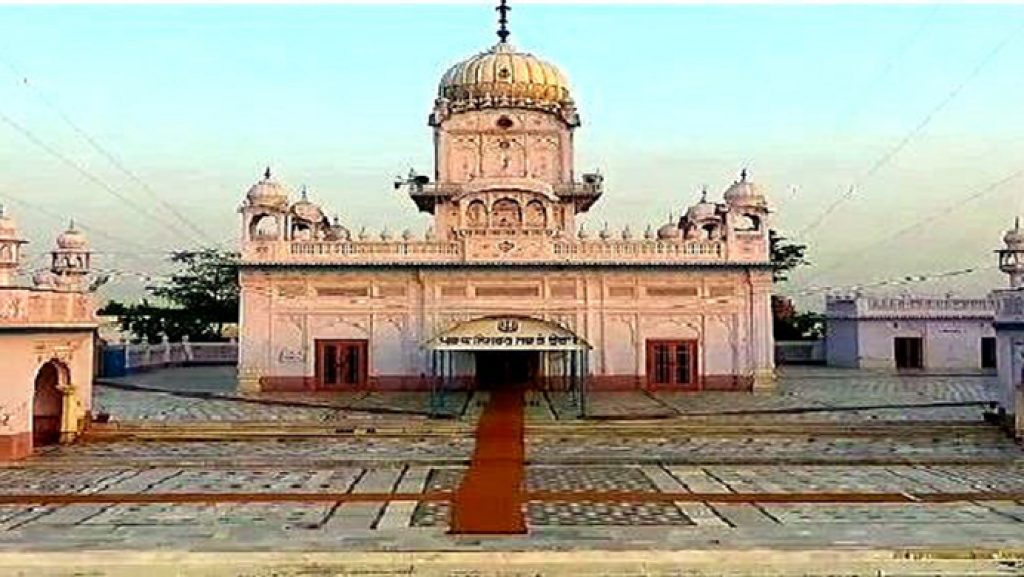 This stands on the southern bank of the main Kurukshetra tank and marks the spot where Guru Nank Dev, using his technique of teaching through practical demonstration, attracted an angry crowd of Brahman priests and pilgrims and in answer to their protest against his impertinent breach of religious injunctions, the Guru explained to them that eclipses of sun and moon are natural phenomena having nothing to do with mythical gods and demons, and that controversy regarding vegetarianism and non-vegetarianism is irrational. The two hymns of the topic that appear in Var Malhar Ki in Guru Granth Sahib are believed to have been uttered on this occasion. A proper Gurdwara was first constructed here during the time of Bhai Udai Singh of Kaithal (1830-43).

Guru Nanak gave counsel to Kalandar Shah, a fakir who used to indulge in miracles. 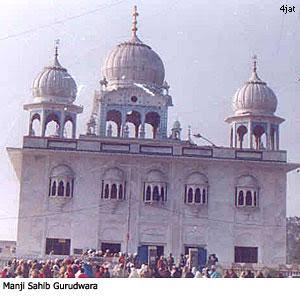 A local Iranian Sufi mystic, Abdulla nicknamed Majnu, met Sikh Guru, Guru Nanak on July 20, 1505. Majnu ferried people across the Yamuna river for free as a service to God, his devotion resulted in the Nanak staying here till end July. It is said that after Guru Nanak Dev had blessed Majnu, he became so pleased with Majnu's dedication that he told his new devotee, "your name will be immortalized". So in sacred memory of this once Muslim Saint the shrine was named Gurdwara Majnu-Ka-Tilla. 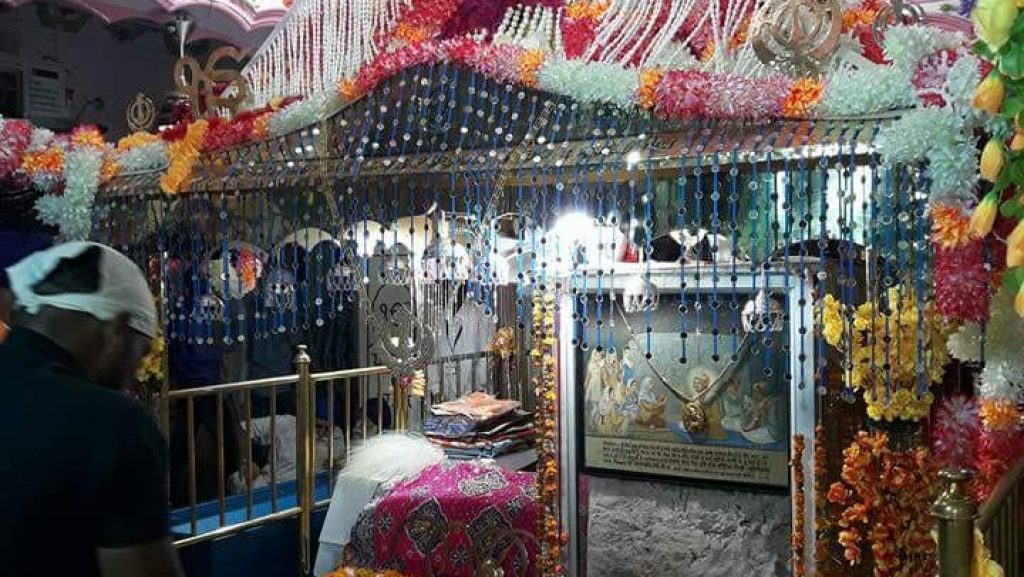 During the Sikander Lodhi reign, SRI GURU NANAK SAHIB came here along with BHAI MARDANA JI. GURU SAHIB stopped here in a garden. This being a Grand Trunk Road a Highway for royal and ordinary travellers. To protect themselves from scorching heat and for rest after long journey travellers used to stay here in the garden. GURU SAHIB transformed a well into a middle of the garden into a Piao Sahib. Tired travellers used to get water and free Kitchen. Slowly steadily people from Delhi started visiting him. Whatever offers were made, were distributed to poor & needy or in the GURU SAHIB's Langar. Sadhus yogis used to come here and discuss with GURU SAHIB the various religious issues. Sikander Lodhi The Emperor, impressed with GURU SAHIBS personality, also visited here. 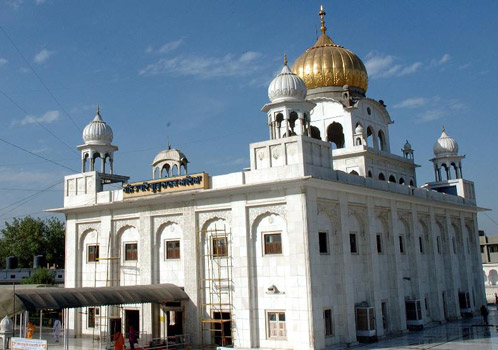 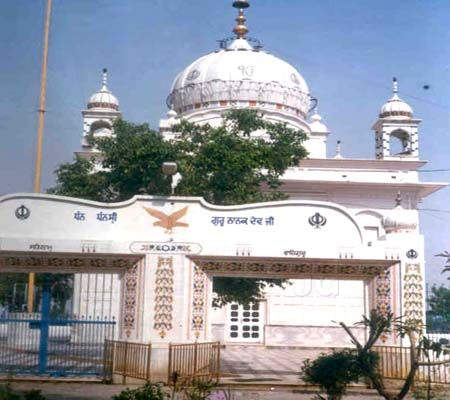 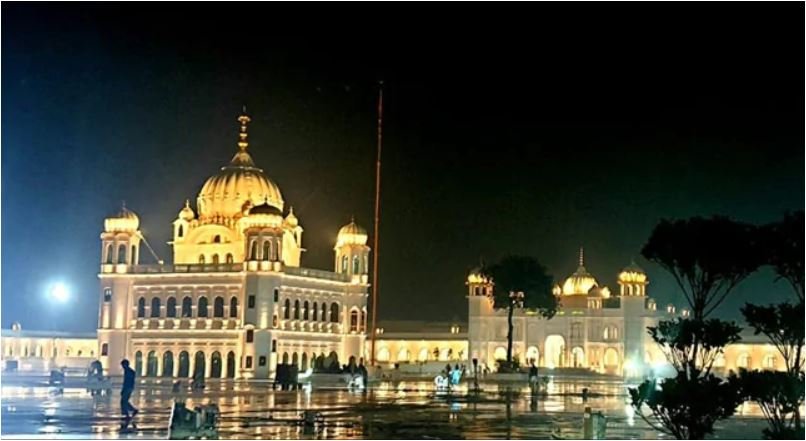