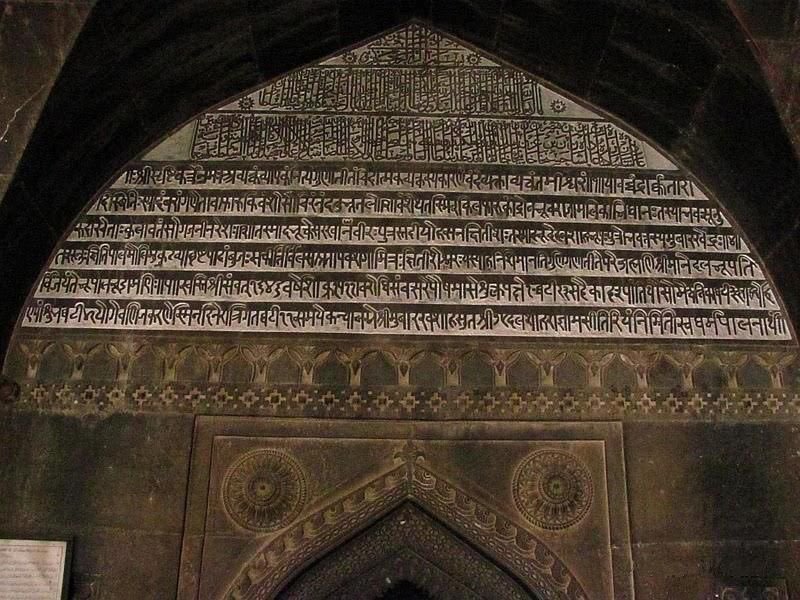 The Jami Masjid, Burhanpur, Madhya Pradesh is the finest examples of the secular spirit, which has a beautifully carved mirhab (niche) with inscriptions in both Arabic and Sanskrit.

The Jami Masjid is made up of Back Stones, it has 35 arches in a series and two tall minars at both the ends giving it a magnificent look.  It has three inscriptions on its Mihrabs in the Prayer hall. Two are in Arabic that contains verses from Quran and Hadis of the Prophet of Islam and the name of the builder Adil Shah son of Mubarak Shah and the year of commencement of construction 997 Hijri. Another Arabic inscription depicts the genelogy of the Faruqi sultans.  The inscription in Sanskrit gives the astronomical position, the time, date and year in the Indian Samvat calendar for the commencement of the construction of the Jama Masjid and details of the builder.

Between 1600 and 1720, Burhanpur served as the second Mughal capital of India and was a cradle of culture. Tehzeeb (etiquette), tameez (manners), taakat (power), tareeka-e-ilmaat (ways of learning); it was a training centre for Mughal princes and princesses and the Farooqis. Shah Jahan spent 40 years in Burhanpur, Aurangzeb spent 44. Whoever became a sipahsalar (governor) here was destined for greatness.

It is said that Shah Jahan wanted to build her memorial on the banks of the Tapti. However, architectural calculations indicated that the loamy black cotton soil couldn’t bear the weight of the proposed building. The logistics of transporting white marble from Makrana in Rajasthan further tilted the decision in Agra’s favour, and the rest is history.

Six months after Mumtaz Begum’s death, her son Shah Shuja led a procession with his mother’s body in a golden casket, to Agra, 900 km north.