Distant view of the fort at Daulatabad 1890

Distant view of the fort at Daulatabad 1890 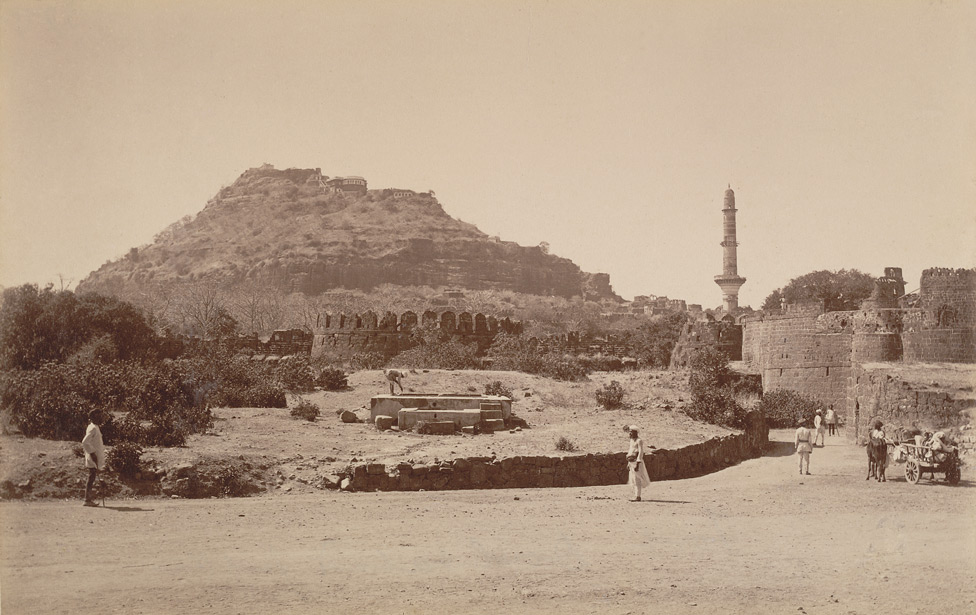 Distant view of the fort at Daulatabad from the Curzon Collection: 'Views of Caves of Ellora and Dowlatabad Fort in H.H. the Nizam's Dominions' taken by Deen Dayal in the 1890s. In the 9th century the site was known as Devagiri (‘Hill of the Gods’) and was the capital of a confederacy of Hindu tribes. In the 13th century there were attempts to occupy the fort but only in 1327 was it occupied by Muhammad bin Tughluq (r.1325-51). The Sultan renamed the town Daulatabad (‘Abode of the Gods’) and decreed that his entire court should move here from Delhi as it was to become the base for his military campaigns further south. The fort subsequently fell to a number of different ruling dynasties before it was taken by the Marathas in the mid 18th century. The imposing fortress is situated on the top of a 200 metre high volcanic hill. There are three concentric lines of fortifications between the outer wall and the citadel which is reached by steep flights of steps. The remains of the original town of Deogiri are enclosed by the outer walls, entered through three gateways. A series of underground passages carved into the solid rock lead to the citadel.Tthe Delhi Sultanate became the key to the Deccan; the Sultanate investment in Daulatabad also gave a decisive impetus to the early literary development of Urdu